Read me, tweet me, if you wanna reach me!

If it weren’t common knowledge that the seasons changed on September 23rd, I don’t think I would have known that Spring had arrived in Uruguay.

The weather is still frigid, going outside is a chore, and I find myself desperately waiting for summer. But in the two and odd years I’ve lived in Uruguay, I’ve learned that I can’t judge the seasons solely based on the weather.

Spring has brought new life to our small farm! Lambs, piglets, and a new calf are currently grazing and playing wherever they can. Their mothers call for them whenever they wander off a little too far for comfort. Paloma, my mom and I find ourselves bundled up on the porch most mornings watching them interact with one another.

However, even with the picturesque scenery of galloping lambs and rambunctious piglets, there is always a bit of heart break. This year we had a couple of mothers reject their babies. One of the sheep rejected her lamb and one of our three pigs killed all of her piglets. We’ve gotten used to the accidental casualty but we’re finding that the deaths this year are higher than normal. 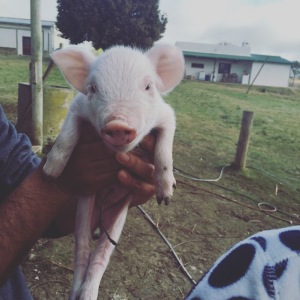 What really got to me this year was the sheep rejecting her daughter. I guess it’s pretty naive of me, but I always thought that mothering was just instinct in ALL animals. But I realized that like with most things nothing is 100%.

For awhile we kept the abandoned lamb by our house. I named her Hope, bottle-fed her and cuddled with her to keep her warm. I grew fond of this little lamb. She would follow me around outside and called for me when I wasn’t close enough for her.

But one particularly cold night she passed away. We tried our hardest to keep her warm and well fed but I guess it wasn’t enough for her. Her death affected me and caused me to grow angry at her mother. I couldn’t understand how a mother could just reject her baby like that.

And then something inside of me clicked. Just because they’re animals doesn’t mean that all of them are born with a mothering instinct. From there I quickly started thinking about how not all human women accept the role of motherhood.

Seeing this sheep reject her child showed me that even with animals mothering is a choice. You can carry a child in your womb but it doesn’t have to mean anything if you don’t want it to. The difference in this situation being that the other sheep don’t really care if you choose to raise your child or not. They’re too busy grazing for their own stomachs to worry about what some other sheep is doing.

Just because someone or something CAN get pregnant, does it mean that they should automatically be expected to be a mother? No. Should we push our individual beliefs on someone else just because it bothers us? No.

I’m sure you can tell where I’m going next with this. I’m not really sure where I stand on the topic of a woman’s right to choose. Some days I’m adamant about a woman’s right to her own body, and other days I cry for the loss of life.

One thing I do know for sure is, you can’t force anyone to be a mother just because they CAN be a mother. As with all things in life, it is a difficult and personal choice. No one should be persecuted for making a choice that differs from what you would personally do.