Read me, tweet me, if you wanna reach me! 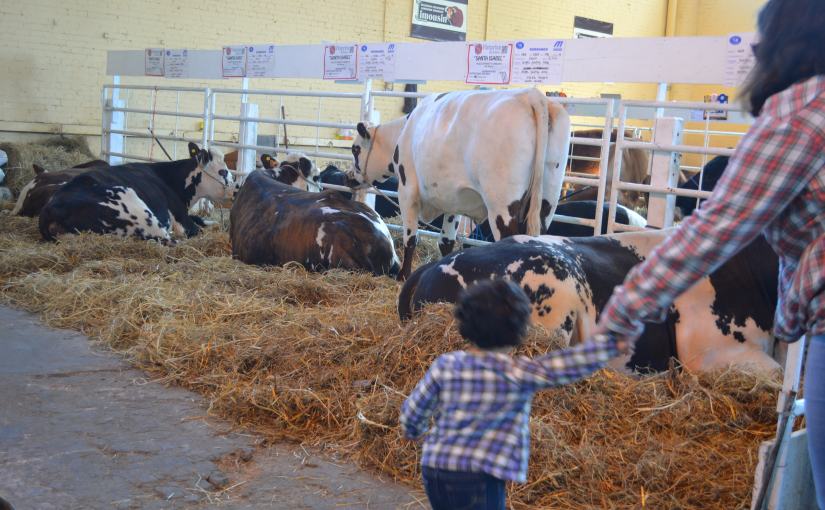 I haven’t updated in what seems like forever. First, I didn’t know what to write about. Then, I didn’t know how to formulate my thoughts into words. And lastly, my computer died last week. Thankfully my mom is letting me borrow hers until I get it back from the repair shop.

My aunt is currently visiting us from Miami so I’ve been quite the busy tour guide!

This post is dedicated to our day at Expo Prado last Thursday. I’ve been wanting to go since we got to Uruguay two years ago but something always came up during those days. The expo is a agroindustrial fair where the country’s best animal farmers bring their prize animals for auction. It’s also where merchants come to show off their latest farm inspired goods ranging from machinery to fashion.

Walking into the fair grounds I quickly got nostalgic for the yearly fair that takes place in Miami. The smell of churros quickly hit my nose, balloon vendors were bombarding us and I just knew it was going to be a good day.

I’ve seen my fair share of cows before but never like this! Prior to moving to Uruguay I literally thought cows came in the black and white variety and that was that. Very small minded of me but hey, I’m a city girl. Carlos was showing off by telling me all about the different breeds, where they originate from, and how they came to Uruguay. I swear sometimes it feels like I don’t even know who my husband is!

We were separated from my mom and aunt for a bit so we decided to check out the goat pen. We used to have goats on the farm but after four died from their mischievous antics, we decided that while we love goats we weren’t suited to own them. Turns out that we have our own little goat seeing how PJ decided to climb into the goat pens.

After walking around aimlessly for a bit we came across an beer stand. For those of you that don’t know, Carlos is an avid beer drinker. As for me, as long as it has alcohol in it I’m almost always in. The beer selection was the usual Uruguayan Patricia selection along with some imported beer like Budweiser and Corona. We decided to try some Argentinian beer called Patagonia. It was delicious and I’ll definitely be looking for it at the exotic beer shops in Montevideo.

We found a little playground area in the back of the park and let PJ run around and release some steam before we decided to keep walking around the animal pens. It was nice to take a break and let her enjoy herself. After awhile we kept exploring and found a little alleyway of sorts that led us to a tiny amusement ride area. PJ originally wanted to ride the teacups but she is still too small so we coerced her to give the carousel a try. As you can see in her photo she’s just a little ball of sass.

Past the rides, there’s an area of artisanal shops selling things like leather boots, purses and even cheesy tourist keychains. My aunt ended up buying herself a mate cup along with some souvenirs for everyone in Miami.  From that point there were more alleyways leading to different parts of the park but PJ was getting cranky so we left.

Overall, we had a very nice day together and I definitely plan on making this a yearly tradition.

If you ever find yourself in Montevideo in the month of September I would definitely take the time to come to the expo. It’s a nice for a family outing with good food, animals and rides for the kids.

“Spirit lead me where my trust is without borders. Let me walk upon the waters whoever you would call me. Take me deeper than my feet could ever wander and my faith will be made stronger in the presence of my Savior.” Oceans-Hillsong United

For those of you that don’t know this song, it’s a pretty popular Christian song by Hillsong United. I remember the first time I heard it and was completely touched by the lyrics. I wanted a relationship with God so strong that I would desire to be taken to the ends of the earth if it pleased Him.

The more I listened to it the more I thought about it’s message. How so far, I’ve literally moved to a country I barely heard of in blind faith. But since I’ve arrived, I’ve been at a stand still.

And slowly, God has been placing opportunities along my path for me to do what I’ve asked. But it wasn’t easy stuff like give money or give the clothes off my back. It was giving my time, sharing my heart with my newly met brothers and sisters in Christ.

Each time an opportunity presented itself, I pulled back more and more. Did I really want to become attached to new people? Couldn’t I just serve from the background? I started doubting whether or not I truly wanted to follow Jesus blindly.

Things started popping up, things from my past that had led me to having a very calloused heart. I’ll refer you to an old post I wrote about my brother in law. After that post, I worked on it and I continue to work on it each and every day. It’s hard, but I make a conscious effort to not hate him.

Anyway, this past Sunday my pastor gave a sermon that I felt was directed towards me. He started the sermon by asking us how many of us have enemies? I shot my hand up, glancing at Carlos, my eyes saying “yeah you already know.” My pastor then asked, “How many of you would get on the cross for your enemies?” I sat there and rolled my eyes because I knew EXACTLY where he was going with this. I felt my flesh want to reject the message. I thought to myself, “Lord, I don’t know if I’m ready for this.”

As the message continued, I felt the callouses around my heart put up a pretty big fight but eventually gave way. And I cracked. I called my good friend, Edith, and told her to pray for me. That God was working on some deep rooted issues in me and I needed a lot of guidance from Him.  She shared a few verses with me and told me that she would keep me in her prayers.

Three days later, Gods test came knocking. I was shocked. I didn’t think that this was how God was planning on working through me even though He had been preparing me for that day for awhile. After all was said and done, I still felt a bit uneasy. Unsure that this was a door God wanted opened in my life. Unsure of what could come out of it.

But yesterday I received my confirmation. I went to visit Edith, her husband, and their five beautiful girls (the youngest being my goddaughter) since it had been awhile since I had seen them. While we were all sharing with each other, I told Edith of God answering my prayer. And she told me that her husband, Ismael, had wanted to share a passage with me in regards to the subject.

Cliff notes version: A master has a servant that owes him a lot of money. The servant can’t pay him back so he begs the master to forgive his debt. The master, being merciful, forgives the debt. The servant then goes on his way and comes along another servant that he had loaned money to. When he asks his friend where his money is, the friend asks for more time because he cannot repay the debt. Instead of being merciful to his friend like his master had been with him, he has his friend jailed. When the master hears of his unkindness he punishes his servant for being unmerciful.

That’s when Ismael looked at me, saw the look on my face, and knew that I understood what was being said. And it came back around to one thing. “Forgive as you are forgiven.”

You see, I always thought that one of my greatest gifts was my ability to forgive. But in that moment talking with Ismael, I realized that my forgiveness is conditional. If the person didn’t acknowledge the wrong they did, I would not forgive them and I would then I harbor a lot of resentment towards them. How dare they think they did nothing wrong?

But I realized, after many years of not knowing that this was my struggle, that forgiveness is actually anything but easy for me. I think that God has been working on me for years to be able to truly understand forgiveness and what it truly means of me.

I’ve spent years asking God to lead me to a place where I have to trust Him wholeheartedly. And in this moment, if trusting Him with my fragile heart and the door that was opened is what I have to do then so be it.

I don’t know if I’ll publicize much of my road to forgiveness as it will be a personal one but I do appreciate any sort of encouragement or if anyone would like to aid in keeping me accountable in my journey.

The topic of when Carlos and I are going to have another baby has been coming up a lot lately. His parents, my parents, extended family, and even members of our church have brought the subject up to us. Which has led us to start wondering when exactly are we going to try for Baby Franco #2.

We first discussed getting pregnant again when Paloma was six months old. We quickly decided we would discuss it when she turned a year old. As her birthday rolled around we pushed it back another six months. Any mom will tell you that pregnancy is exhausting. Chasing after a one year old is exhausting. When I thought of being pregnant AND chasing after my overly rambunctious then-18 month old we pushed again to her second birthday.

Here we are two months shy of our latest deadline and we’re still unsure if we’re ready to have another baby so soon. Things are just starting to fall into place for us. Carlos’ art show is next week, things are starting to move quickly on that end, and overall we’re getting into our own rhythm. Do I really want to be pregnant and raising PJ alone while Carlos travels? Nope!

So we decided to write a bucket list of things we want to accomplish before Baby Franco #2.

It’s a small list but it’s basically all traveling which at this moment in time is not something we can freely afford. We’re waiting to get our Uruguayan permanent resident cedulas to see if we can bypass the reciprocity fee into Argentina.

Overall we’ve got plans and right now another baby doesn’t really fit into it. If it happens then great but we’re not looking for a cute, warm and cuddly bundle of joy right now. We’ve talked about possibly discussing it again in February, once PJ starts CAIF full time. But I think we’ll wait a bit longer.